In this month’s Mean, Median, and Moose we explore the gig economy in Canada.

Measuring the Gig Economy in Canada

There has been little research into the extent of the gig economy in Canada. Statistics Canada asked some questions as part of the October 2016 Labour Force Survey – whether a respondent had offered or used online sharing services. The survey found that 0.3% of Canadian adults had participated as a driver in a peer-to-peer ride service and 0.2% had offered a property through a private accommodation service. On the other end of the spectrum, the Bank of Canada estimated that up to 30% of Canadians participated in some form of informal paid work.

To address this gap, Sung-Hee Jeon, Huju Liu and Yuri Ostrovsky did some research that was published by Statistics Canada. They used a combination of Statistics Canada data, including tax filer data from the census, the Labor Force Survey, and the Canadian Employer-Employee Dynamics Database. CEEDD includes individual and corporate tax returns. They estimate that 8.2% of Canadian workers participated in the “gig economy” in some way in 2016, up from 5.5% in 2005.

For the purpose of the research, the authors identified “gig workers” as a subset people who reported income on T2125 forms, which are required for reporting business, professional or self-employment income. The definition was T2125 filers who were unincorporated, not in a partnership and did not have a business number.

A business number is required in Canada for certain classes of business (for example people who do import/export) as well as for anyone whose revenue exceeds $30,000.00 per year. Based on this definition, the researchers found that just under 50% of male and 45% of female gig workers fall into the first or second income quintile – the bottom 40% of income earners. Gig work is much more prevalent among lower income earners – 11.3% of men and 12.3% of women in the lowest income quintile participated in the gig economy. About 64% of men and women participating in the gig economy do not have a degree.

The research breaks down gig workers by industry and job classification. We used the reported size of the Canadian workforce in 2018 by province and the national distribution of gig workers by industry from this research to estimate the number of workers by industry in each province in Canada. Because the CEEDD data is not public we were not able to take into account the distribution of industries within provinces, but these numbers provide some interesting back-of-the-envelope figures to look at when estimating the size of the gig economy in a particular province.

The most common industry for male gig workers is professional, scientific and technical services, and for women it is health care and social assistance. Transportation and warehousing, which would include ride sharing services, represents 8.3% of male gig workers and 1.3% of women working in the gig economy. Accommodation and food services which would include short-term property rentals was 1.2% of the pie for men and 1.4% for women.

The biggest takeaway from this research, aside from a healthy debate around the definition of a gig worker, is that the gig work that grabs headlines – the internet-mediated stuff like Uber and DoorDash – represents a pretty small fraction of the landscape of gig economy workers in Canada.

The Typology of Gig Workers

ne of the most interesting things about gig work is the vast difference in the type of work gig workers do. Some are taking on freelance graphic design roles while others are delivering our DoorDash orders and others are using apps to pick up renovation work. It seems that just about any role could be made into gig work at this point.

Luckily for us, the Diversity Institute, the Future Skills Centre, and Doblin explored exactly this in their “A Typology of Gig Workers in Canada” report, published in December 2020. Instead of exploring the usual conditions or structure of work for gig workers, it examines the role of agency in the gig economy, including access – how and why gig workers enter the gig economy, movement – how and why they move around and within the gig economy, and capital – what are the types of currencies being exchanged within this economy, and why. It does specifically focus on digitally-enabled gig work, so keep that in mind as we explore the typologies.

The central part of this report divides gig workers into four typologies: The Platform Professional, the Entrepreneurial Influencer, The Asset Enabler, and The Tasker. These were created based on the level of skill (human capital) that a gig worker contributes; the amount of investment (economic capital) they invest in assets, service offerings, knowledge, or experience; and the amount of social capital they leverage. In the table below (taken from the report), you can see that Platform Professionals require high capital in all three areas, Taskers require low capital in all three areas, and Entrepreneurial Influencers and Asset Enablers sit in the middle with capital requirements.

You can see these typologies are a really useful way to think about gig work as it becomes increasingly popular and continues to shift the Canadian economy and labour market. Rather than thinking of Uber and delivery drivers as the main type of gig workers, like a lot of us do, we can better recognize that there is a wide range of gig workers. Some are doing quite a bit better for themselves than others through this type of work in terms of things like income, stability of that income, and even the enjoyability and ease of their work, but all are able to capitalize on the agency and flexibility that gig work offers.

One thing we decided to do was look at what kind of open data gig-economy companies provide. These are private companies that probably feel that their data provides one of their competitive advantages and so what is provided here is understandably hit and miss. We did find a little bit of data though and a couple of tools the companies have released for data analysis.

Uber movement provides information on travel times, travel speeds, and cycling data for a limited set of large cities. Currently the only Canadian city with data is Toronto and there is only information related to travel times. Stil, the visualizations are quite good and the data is easily downloadable for personal use. Go check it out.

Pickings are slim for other kinds of data. But there’s the occasional interesting statistic posted on the Skip the Dishes’ Instagram account. We consolidated all of those into a single table which helps provide some kind of idea of the scale and buying behavior of Skip the Dishes customers.

As we’ve mentioned in other episodes, Uber has an excellent mapping project called DeckGL. In addition, they’ve done some interesting things in hexagonal divisions of maps and built a system to neatly pack smaller hexagons into larger ones and mix them all together. That project is called H3. If you’re not much of a software developer but still want to play with these extremely powerful tools, check out kepler.gl which removes some of the coding that needs to be done.

Possibly the most glamorous version of gig work is as a social media influencer. Unfortunately there is very limited information on this topic in Canada that is publicly accessible – lots of paid websites asking for you to subscribe for info.

One takeaway is a 2021 crackdown by CRA when they fully defined social media influencers as a employment classification similar to self-employment and requiring the collection of HST etc. after certain income levels are met. This means that the influencers in Canada need to start reporting sponsorships, product sales and other income sources in their taxes.

In 2016 Ipsos did a research project on Social Media Influencers titled “Cracking Social: Harnessing the Contagious Creativity of Influencers”. They have done a number of subsequent projects on how companies and leverage influencers for brand and sales opportunities. A recent report by Ipsos for the Canadian Foundation of Innovation found that 73% of young people in Canada follow a social media influencer who had “anti-science views” related to COVID-19 or climate change. The content that these influencers are creating is a major challenge and it is not all large influencers as a number of tiers have been established in marketing circles creating segmentation of social media influencers:

From here and although this is from Instagram- the language and tiers seems to have proliferated. 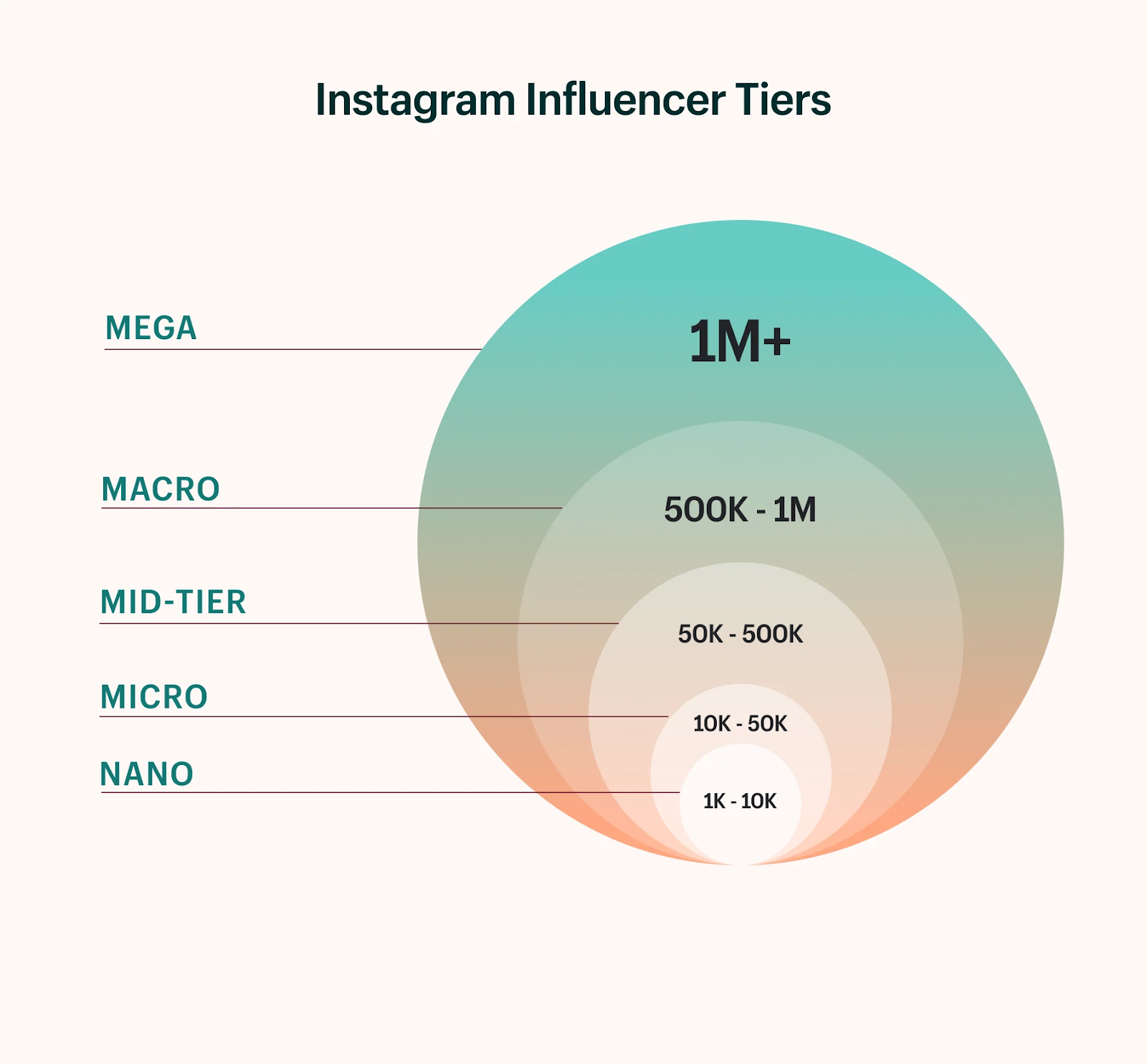 The tiering of influence, allows a wider range of individuals to be viable as an “influencer” recognizing the work and benefits grow through the tiers. Where it eventually lands is whether or not people listen to influencers and actually buy things. Data from Statista International Survey on social media and influencers shows which countries are more or less likely to buy products advertised to them.