In today’s podcast we’ll look at housing data in Canada and what it costs to put a roof over your head.

CMHC has a web portal that consolidates all of their data offerings in one place. Their “Housing in Canada Online” (HiCO) portal looks like it contains some quite interesting data but their web implementation of the Beyond 20/20 platform for data analysis, but unfortunately when we tried to use the portal we encountered connection errors and were not able to examine it in detail. More positively, the data tables page includes data on Canadian households, housing market data, mortgages and the rental market. Many of the datasets provide data at the CMA level as well as other levels of geographic aggregation.

The data available from CMHC is rich and valuable, providing a number of different ways to look at the Canadian housing situation across many dimensions interesting to researchers and the public. Less positively, the portal is also unfortunately full of partial and incomplete data, and the data is often segmented in ways that may make sense for typical data consumers but are difficult to use for other scenarios. If you want to put together a view of data over a longer period, be prepared to stitch together many spreadsheets containing data for a single month.

CMHC’s data, derived from the long-form census, breaks down Canadian households according to demographic characteristics including immigation, Aboriginal status, and type of household. The data set is further broken down according to these characteristics to identify housing need among renters vs. owners. The data available on the portal goes back to the 2001 census and allows us to look at changes in housing need in Canada over the past 20 years.

The top-line data looks like this – progress was made in the first decade of the 21st century with trends reversing after 2011. 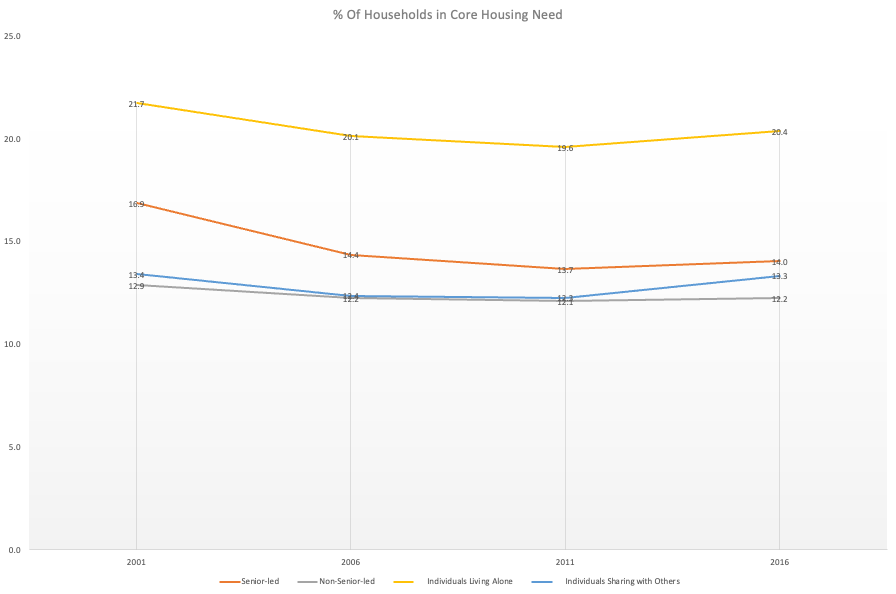 This table breaks the data down into more detail. At this level of detail it is easier to identify the segments of the population where Core Housing Need is a significant issue.

Since 2001, the gap in Core Housing Need between Aboriginal Peoples and the non-indigenous population has been narrowing. 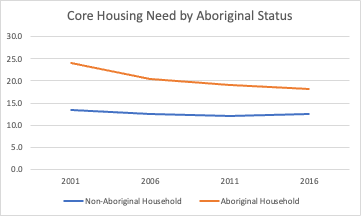 Newcomers to Canada have significant challenges accessing housing that meets all standards, with positive trends reversing after 2011 for all but the most recent immigrants. 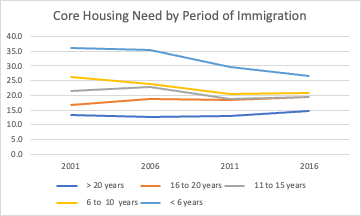 Statistics Canada has a tremendous amount of data on housing, and is a source for many derived data sets provided by other organizations. The Stats Can landing page for housing statistics is a great place to start digging into the available data. Besides links to specific daa series they highlight the Canadian Housing Statistics Program, The Canadian Housing Survey, and provide maps and interactive dashboards as well. Want to see the change in value of building permits issued in a CMA over time? The dashboard has you covered! 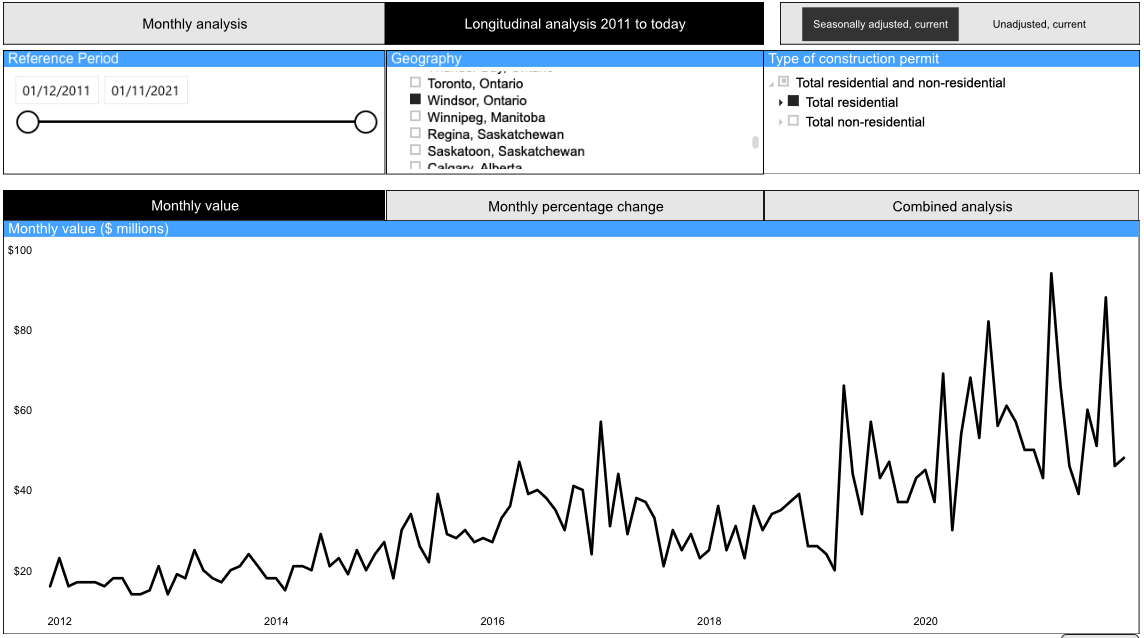 The Federal Reserve Bank of St. Louis maintains a data portal called FRED which contains a good amount of national data on Canadian housing. They collect and aggregate data from multiple sources including the OECD and Statistics Canada, then publish it on their portal with a nice user interface. Here’s their chart of the housing component of the CPI, indexed to 2010 with a value of 100.

If you’d like to compare Canadian data to our international peers, the Organization for Economic Cooperation and Development maintains an affordable housing database with plenty of data and interactive tools to compare countries. The front page has a nice tool that lets you compare the distribution of housing between renters, owners and mortgage holders in the countries you are interested in:

Housing and the size of the city in which you reside

We’re all well-aware housing costs have been steadily and exponentially rising in Canada. According to StatsCan (Table 11-10-0226-01), Canadians are spending quite a bit more on housing than they were even a few years ago. In 2015, Canadians were spending an average of $15,802 each year on their principal accommodation (renting or owning, and including water, fuel, and electricity). By 2019, they were spending $18,371. Average costs for water, fuel, and electricity haven’t seen large increases (averaging $2,478 in 2015 and $2,535 in 2019), confirming that it is housing itself that has become much more expensive. But how do these costs change depending on the size of the area you live in, and does where you live make a difference in the change of your housing costs year-to-year?

As you may have guessed, where you live does make a difference in your housing costs, whether you’re renting or owning. The smaller the population, the less you’ll pay – usually. 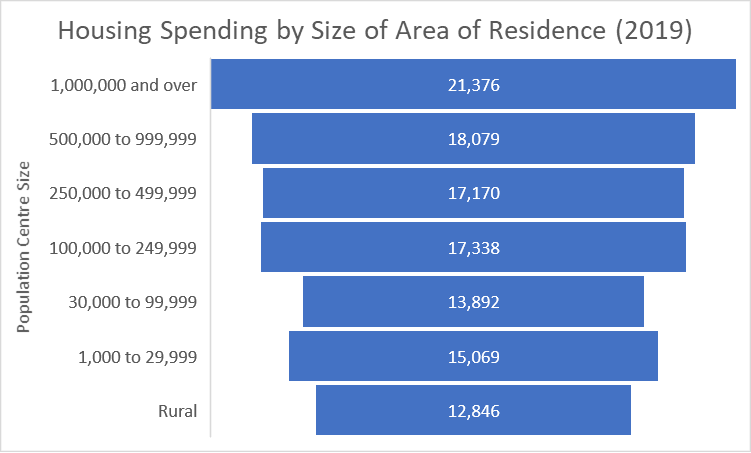 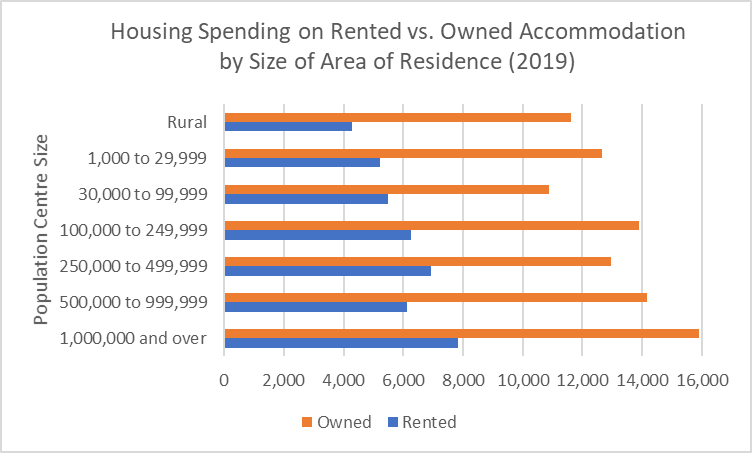 There are significant differences in the cost of renting vs. owning. Renters tend to spend much less on their accommodation, spending an average of $6,695 in 2019, while owners tend to spend much more, spending an average of $14,211. This is likely skewed by owners buying pricey homes, while renters tend to live less luxuriously. Interestingly, if you own your accommodation, it is actually slightly cheaper to live in a town of 30,000 to 100,000 people than in a rural area, at $10,864/year vs $11,612/year, but for renters, living in a rural area is your best bet when it comes to costs, running you $4,280/year on average, and cities are to be avoided if you’re trying to save on housing, totalling an average of $7,846/year.

Increases in costs of accommodation from 2010 to 2019 have varied significantly depending on whether you’re renting or own and the population size of your area of residence.

A huge amount of factors can come into play to affect these numbers, and it will be interesting to see the 2021 numbers given the pandemic and the changes it brought in where we live and how much we spend on housing.

There’s a lot of talk about inflation in the news, and a lot of talk about housing. Statistics Canada uses housing costs as a component of the consumer price index – the main measure of inflation that looks at how expensive things are relative to a 2002 baseline. A CPI of 100 for 2022 would mean that the good in question costs the same as it did in 2022. A CPI of 150 means it costs 50% more. So, how does the CPI of housing (rental and owned) compare to other kinds of goods? Let’s take a look: 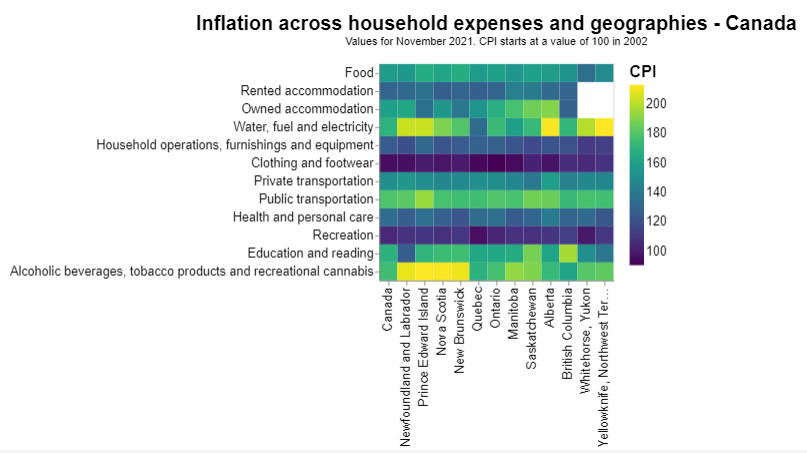 Looks like, in terms of CPI, the cost of home ownership has been going up more quickly than the cost of renting. If you own your accommodation, however, you may get some of the money back if and when you sell the property. That falls out of scope of a CPI measurement but it’s interesting to take note of anyway if you are not planning to ever sell your home. Owned accommodation’s CPI is between 128 and 190. It may surprise you that the CPI for owned accommodation is lowest in BC and highest in Alberta considering that housing costs in Vancouver often make the news. Well, CPI is the average and about half of the people in BC live outside the greater Vancouver area – in areas where housing could be dramatically cheaper. In addition to that, the CPI for owned accommodation includes items like property taxes, home insurance, home replacement costs, and maintenance. If those things cost more in Alberta it would be reflected in the CPI. Interest rates may also be lower in BC and those interest cost calculations are based on a weighted average over 25 years. Finally, if housing was expensive in 2002 in BC, CPI uses that as a baseline. If it has always been historically higher the CPI might look better because the baseline is higher.

It’s interesting to note how housing compares to other costs of living. In the maritimes alcoholic beverages, tobacco and cannabis have done much worse. The same goes for the costs of water, fuel, and electricity in Alberta. We’ve broken these down further into a per-province view at the link below:

Here’s Alberta to get you started. Check out the fuel, electricity and water costs starting in 2018.

For me information on how CPI is calculated for accommodation, this article is a great resource:

ADU’s – tiny housing, granny suites, backyard cottages are a trendy topic in housing. Smaller units, built on existing properties by homeowners create a wide range of potential benefits for homeowners, renters, and communities. Unfortunately there is very limited data on this type of housing in Canada.

Fortunately there is a local (Windsor) solution to that data gap. www.adusearch.ca was conceptualized by Sarah Cipkar and Frazier Fathers with funding from CMHC as part of their Housing Supply Challenge -Data Driven Round. Working with the University of Windsor and Parallel 42 systems they leveraged open data from the City of Windsor to model how many lots would be eligible for detached additional dwelling units.

Using a GIS model we measured every residential lot to determine if they had the physical space to build an additional detached unit that met the local zoning by-law requirements. This was categorized in a simple Green (meets criteria), Yellow (meeting criteria but other fact impacting – existing structure), Red (doesn’t meet criteria) colouring system that highlighted the status of a particular lot. The blue area represents the actual physical buildable taking into account zoning set back requirements. 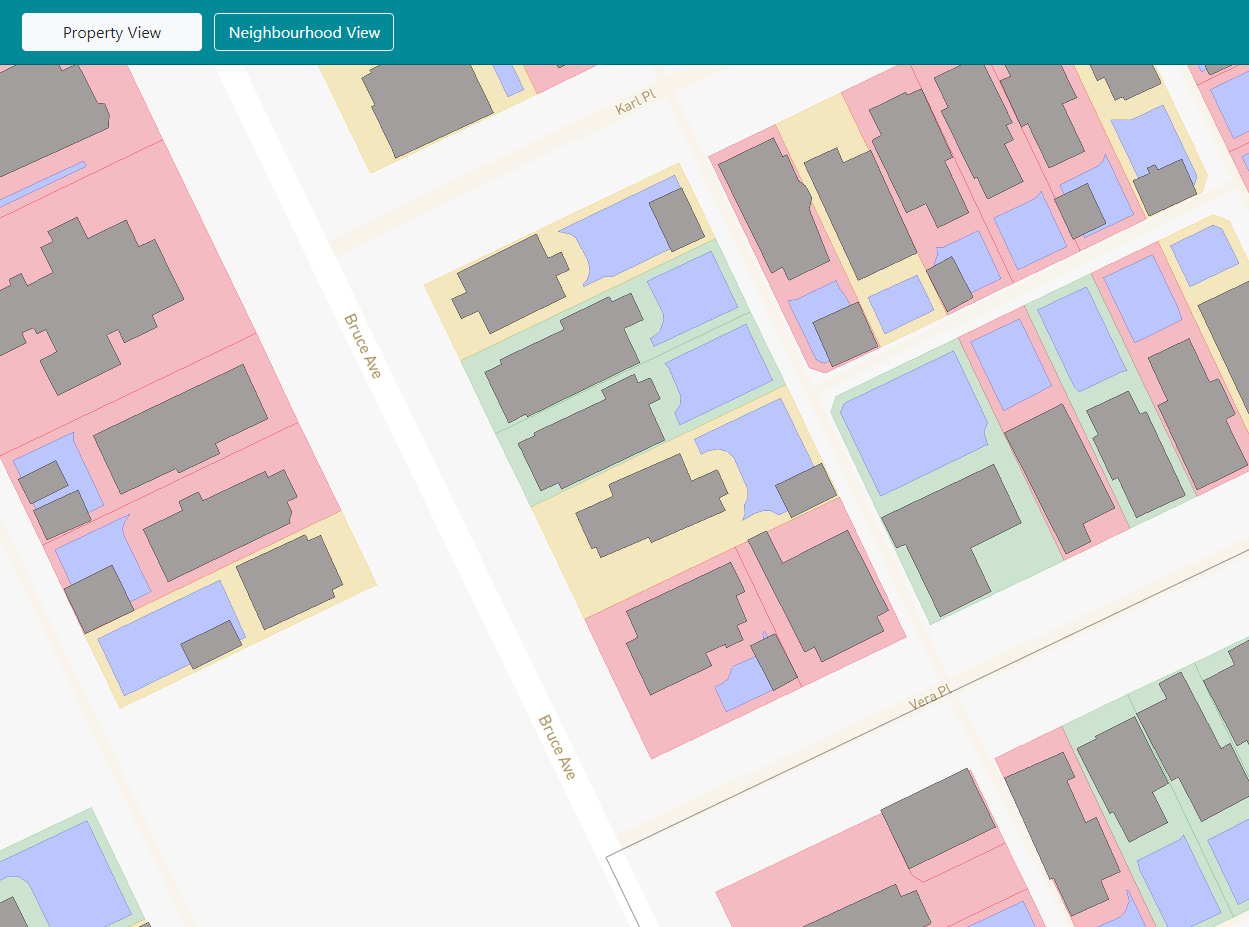 This lot by lot data is aggregated to a “neighbourhood” level that aligns with Census Dissemination Area boundaries. In this view we aggregated the number of lots in each DA and created a modal visualize as well as captured average lot and other characteristics. In future iterations this aggregate data will be exportable as open data. 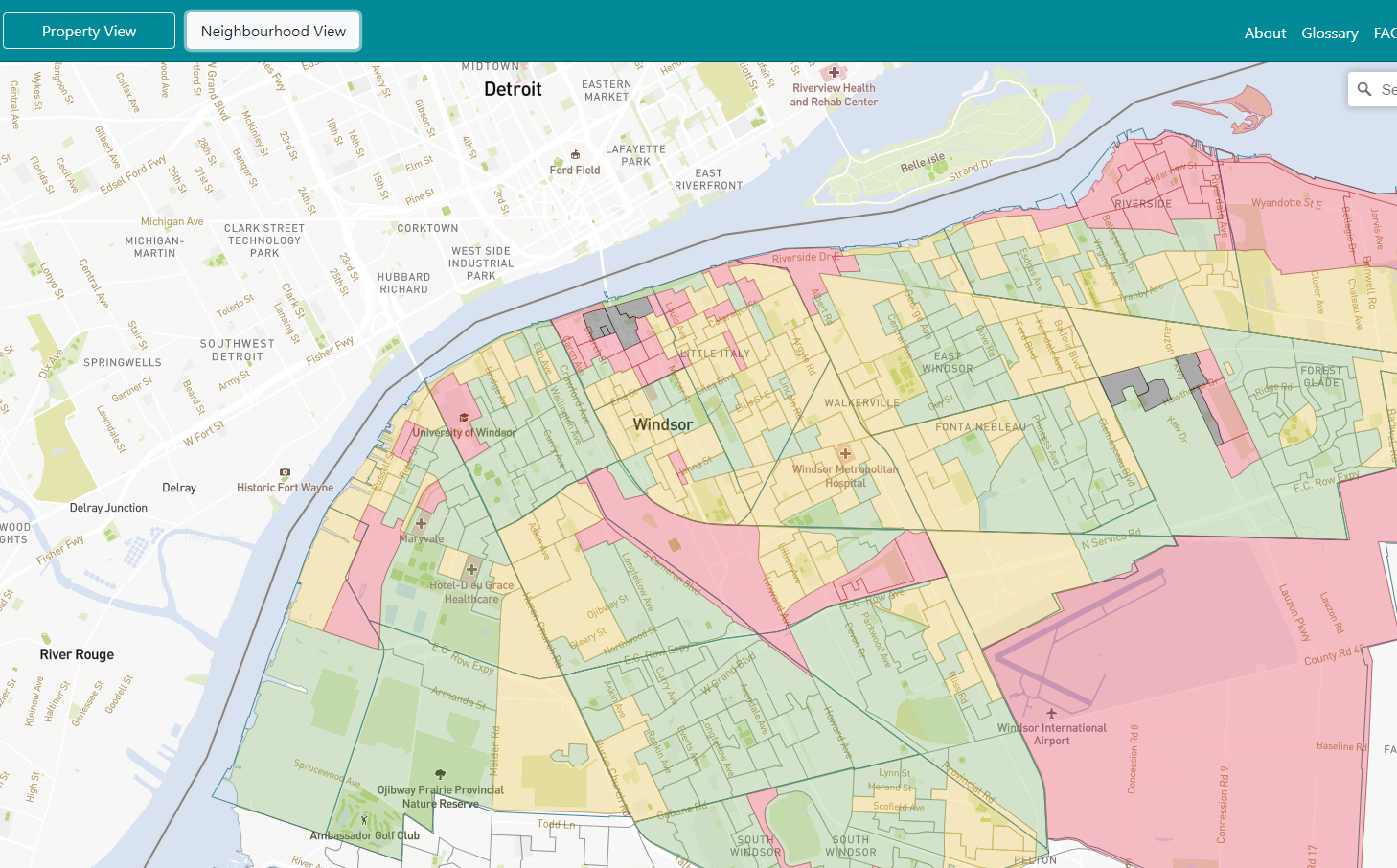 Beyond the aggregation the neighbourhood level data also contains proximity to various amenities (normalized to a national level) from Statistics Canada, existing ADUs according to municipal building permits, and test financial modeling for average homeowners and renters at a DA level.

In early 2022, this team was funded by CMHC to scale their research and tool to the 100 largest municipalities in Canada. If you want to see a full demo of the tool by Sarah Cipkar and Frazier Fathers in partnership with the Windsor Centre for Cities and Law, you can watch it at this link.